As I finished up my maternity leave and came back to work 6 weeks postpartum, I have had a lot of reflection. I spent the first three weeks documenting my recovery and wanted to work on putting that into a blog post that summed up my journey thus far.

At 27 weeks and 1 day, on Sunday May 15th, I went into the ER around 5AM with chest tightness/epigastric pain after having swelling and high blood pressure since Thursday. I was transferred to OB triage around 10AM when I started throwing up and pressures continued to be high. Blood work confirmed protein in the urine and was diagnosed with pre-eclampsia. The first conversations I had with my OB and Maternal Fetal Medicine team said that I was sick but they were going to continue to monitor the situation. They did recommend that the intended parents make plans to come to the hospital as soon as they could (they were driving in from Chicago). I was given a steroid shot, a magnesium drip and some nausea medication. At this time, I was told that they would do a growth scan of the baby the next morning, but I would not be leaving the hospital until I delivered. The goal was to make it to 34 weeks (which was 7 weeks away). This part was a bit emotional for me to say the least.

Shortly after, I was transferred to the labor and delivery floor and pretty much had a nurse in the room with me at all times. Around 1PM both MFM and the OB came in and I just had a feeling it was not good news. They told me my liver enzymes were significantly elevated and that I would need to deliver today via cesarean delivery. To say I was upset was an understatement given that part of the reason I went on this journey was to challenge my body to see if I could have an unmedicated vaginal birth, but knew for the sake of myself and the baby this is the route that we needed to go. 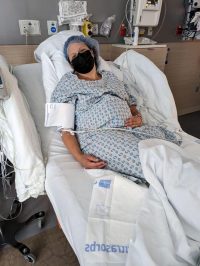 Typically around this point, women are moved up to the postpartum floor but they chose to keep me on L&D another night for closer monitoring. I continued to work on pumping, still had the catheter in and was moving very little. I did not have a lot of pain at this time since my anesthesia and nerve blocks hadn’t worn off yet.

The next day, the catheter was removed and I was able to stand up but felt too unsteady to attempt a walk to the bathroom. By that afternoon, I moved up to the postpartum floor and the distance from the bed to the bathroom was much shorter, so I successfully got there and was able to urinate but was having a lot of shakes with movement/activity (they reported this was common with magnesium and was definitely a very weird sensation). My magnesium drip stopped later that afternoon, but IV stayed in just in case it needed to be started back up.

Day 2 and 3 consisted of pumping every two-three hours and resting. The first pump I was able to express colustrum while in the recovery room and then next 24 hours I really didn’t get much, which I know is normal. By Day 2 I was starting collect more and able to put on swabs and then syringes for the parents to take to the baby. Exclusively pumping was a whole new game for me so it was definitely an adjustment only going off time instead of cues from a baby. 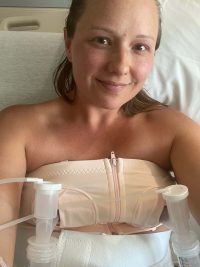 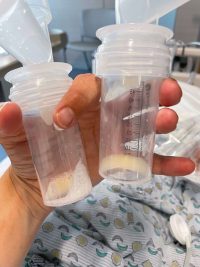 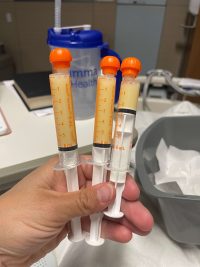 Throughout Tuesday (Day 2), the shakiness continued through the evening every time I would get up to go to the bathroom. The nerve block started to wear off and I could feel a lot more pulling through this incision and was very dependent on the bed moving to maneuver out of bed. I was having a lot of right chest/upper neck pain and was told that is really common due to air bubbles from the surgery. I swore I had the biggest trigger point restriction up there, but as fast as it came on, it started to go away within the same day.

My favorite part of that day was being able to successfully shower and that felt AMAZING! 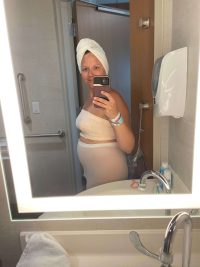 Wednesday May 18th, I was able to go home. I left the hospital around 2PM and went to pick up the kids with my husband. Took it easy that evening and continued to pump every 2-3 hours.

My mom came into town Thursday to help with the kids and give me a chance to rest. It was really nice to have an extra set of hands for a few days. I would try to take short walks most days of the week 5-10 minutes at a time and then rest. I spent time each day, especially during pumping to do my connection breaths with my pelvic floor. I also started to do some very light scar mobility and desensitization work.

The next week when I was home was nice because the kids were still in school, so I was able to rest while they were gone. I didn’t do much of anything during this time except pump and rest. I didn’t feel up to trying to do housework or even computer work so I didn’t 😃. Trying to remember what I tell my clients, and give myself some grace during this period especially since every time I tried to do too much activity (ie make breakfast) my blood pressure would elevate and I would have symptoms.

From the time I left the hospital until about 2 weeks postpartum I didn’t really have a lot of bleeding if any. Around that two week mark, I had about a day and a half of light bleeding that went away. I also started to try to wear some of my more regular underwear but couldn’t tolerate it as it was tight and sat right at my incision. I also was able to start driving right around that two week mark which was wonderful.

By week three I had started moving more and did more mobility work consistently but didn’t try to do any specific exercise regimen. I continued to walk (and chase my kids around as they were now on summer break). Pumping was getting better and still able to keep ahead of schedule with producing for the baby while she is in the NICU.

During the fourth and fifth weeks I continued to spend most of my days with my kids trying to find a mix of summer activities and rest. I also went into work for a few days for just a few hours at a time. Overall, physically I was feeling really good but hadn’t tried to re-introduce exercise quite yet.

At six weeks postpartum and I started back to work for about three days and I also started an exercise program, working full body three times a week using only body weight and making sure I have good form and connection with pelvic floor during all activities. I am still pumping, though it is a bit more challenging with scheduling since I am out of the house and with seeing clients.

In general, I am feeling pretty “back to normal” all things considered. But this is by no means a standard for most postpartum recoveries for many reasons. For one, I only made it to 27 weeks. Not even 7 full months, barely into the third trimester. This means I didn’t go through a lot of the weight gain, strains and increased load associated with the end part of pregnancy. This was my second cesarean and I also knew some of the basic things that worked and didn’t work for me last time. Working on the incision and surrounding skin early for desensitization, breath work to decrease tension and using a wedge pillow in bed to avoid as much lifting.

Additionally and very importantly, I did not have a newborn competing with the demands of healing. Yes, I was chasing around a 4 and 5 year old fairly early, but they can do a lot on their own. My sleep wasn’t has affected due to not having to wake up with a newborn and we didn’t have to negotiate through the trials and tribulations of that very hectic newborn stage.

I hope that sharing my story will shed some light not only on general postpartum recovery and how important it is to take your time during those first weeks, but also on how serious preeclampsia can be. Knowing the signs and listening to my body literally saved my life. If you have questions about your postpartum recovery, signs and recovery after preeclampsia or anything else pregnancy, postpartum or general pelvic health as always feel free to reach out directly. 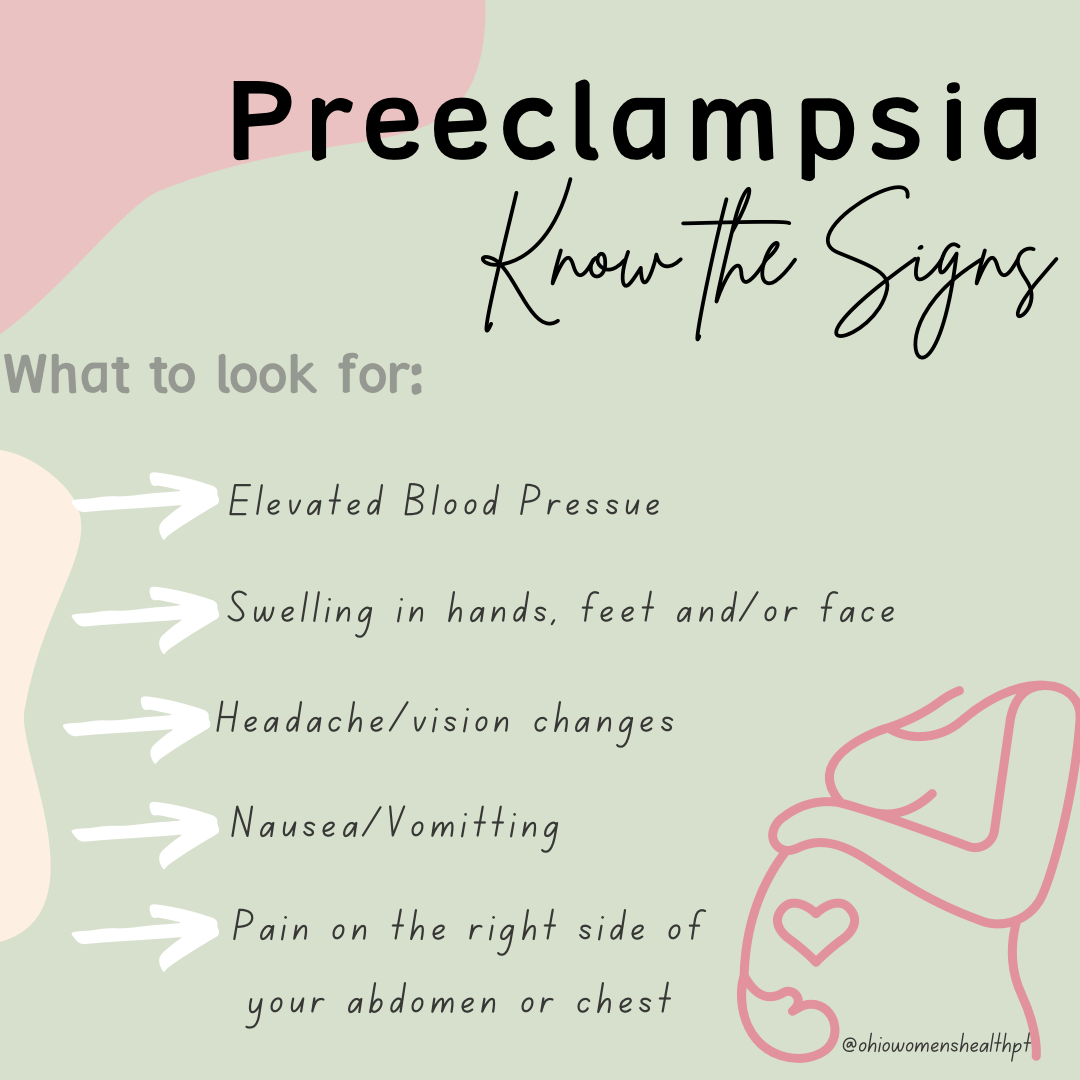